The waters off the Liguria coast comprise a World Wildlife Fund-monitored International Whale Sanctuary , home to 12 species of whale as well as dolphins and plenty of other marine life. It's easy to join summer boat excursions from towns along the Riviera for whale-watching in open sea (June-Sept at least twice weekly).
In these later years interest in Whale Watching has been growing all over the world and also in the Mediterranean. That is observing the cetaceans in their natural environment. This growing activity interests a vast range of operators and clients. It is not cruel and has a great educational importance.

Whale- Watching is the sighting of cetaceans. The triangle of the sea called "The Cetacean Sanctuary" - Costa Balanae was the name the Romans gave to the area between the coasts of Sardinia, Corsica, Liguria and Provence. Portofino, originally Portus Delphini, owes its name to the presence of the dolphins which inhabit its waters. This is also a testimony that in the history of this area of the Mediterranean the cetaceans have always been present, and still today , every summer, approximately 3.000 whales and thousands of other cetaceans, for example dolphins and Sperm Whales cross this warm sea getting a store of food for the winter.

In the middle of our sea "Mar Ligure" which is half way between the Italian-French coasts and Corsica, you can have exceptional sighting of dolphins and whales. This zone today is a sanctuary for cetaceans. March 1993 Italy, France and Monaco (Principato) signed a joint agreement for the protection of these waters.

It is the first time there has been the institution of international park in open sea. It was discovered there is a difference between this zone and the rest of the Mediterranean. Because of winds, currents and other oceanographic factors it is rich in nutrient and so abound all the organisms which form part of the food chain, including marine mammals. In the Liguria Sea live 8 species of cetaceans (this was estimated by Greenpeace at the University of Barcelona). The more numerous are the striped dolphins which often accompany the prow of the boats, maybe for curiosity. Then there are risso's dolphins which can be recognized by the typical scratches which cover their body. There are also fin and sperm whales, bottlenosed dolphins, cuvier's beaked whales, pilot whales and common dolphins. 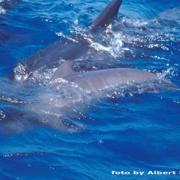 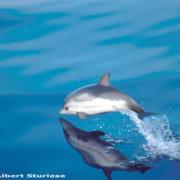 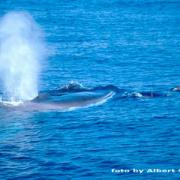 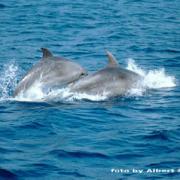 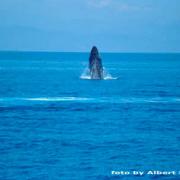 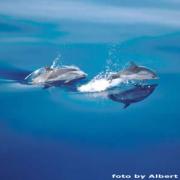